By the old calendar (see Julian calendar) today's the first day of 2008. It's sort of a family tradition to celebrate new year by the old calendar here in Serbia. Unfortunately for me, I got sick the day before. 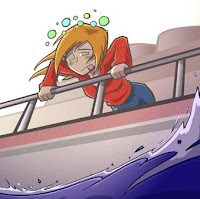 What was the diagnosis? With my limited (yet) medical knowledge, I believe it was either cold (viral gastrointestinal infection?), gastroenteritis or just a grumpy stomach after so much eating these days - whatever it was, the emesis was inevitable! I remembered a movie scene, where people simply puked out some fake juice. In any case, mine was not just fake juice. We had a lot of dinners during my short stay in Cyprus, lots of friends wanted to see us, some of them just to see how we're doing, what have I achieved so far etc. It looks like I have overworked my poor stomach and it declared strike! :)
To make matters worse, a headache and fairly high temperature were presented shortly after the "sailing-at-sea" nausea feeling to the symptomas, therefore I had nothing else to do than start treating myself with a doze of a domperidone-based anti-emetic drug and paracetamol.

So, 2008 - new year, new expectations, new destinations, new romance, new... everything! May this year be the best for you and your family, enjoy it as much as you can, just don't forget to grab a book from time to time.

Update: Forgot to mention the celebration that happened yesterday at midnight, fireworks literally lit up the sky over the Cathedral of St. Sava, one of the biggest cathedrals in Europe. Here are some of the pictures, taken by B92: 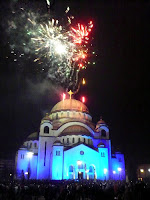