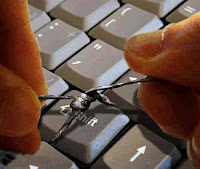 I just read a blog of a friend and thought to join about the "victorious" bugfix.
I adore my hotkeys / shortcut keys. I was tired of switching back and forth languages while writing. Due to this bug, which developers have ignored for the sake of the 2% of users (and partly because they didn't care). So, after a *lot* of comments (around 200) and expressed deep frustration, someone decided to patch it, and another one, aaand one more, until the patch finally got reviewed and added to the trunk!

Looks like GNU/Linux and GTK are alive after all :)