Cells use home-made glue for repairs

Ever wanted to use a superglue to fix a broken toy because your baby kept crying about it? Imagine a 'glue' in our human body, called cohesin! A substance that takes part in DNA repairing, while the astounding phenomenon is tagged as cohesion.

During cell division, the sister chromatids might come apart too early, which creates a severe risk of the daughter cells ending up with the wrong number chromosomes (46 for human body cells; brings to mind the 'number of the beast'). This often results to a tumour cell, a cell that keeps reproducing itself rapidly with no apparent function, which results to a mass of 'broken cells' that keeps getting bigger and creates severe damage to the body.

So, think of a repairman that 'checks' and tries to fix damaged chromatides. Dr Sjögren and her research team have discovered the new mechanism of sister chromatides repair just before the cell division, and they explain: 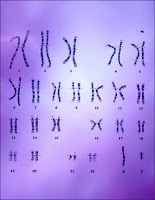 "We have shown that chromosome segregation and DNA repair are partly dealt with by the same machinery. These findings provide new understanding of two fundamental cellular mechanisms and may also be of value to cancer research," says Dr Sjögren.

(This was published in Science)

Email ThisBlogThis!Share to TwitterShare to FacebookShare to Pinterest
Posted in: genetics, health, medicine