The Harvard Medical School and Duke University Medical Center have brought into the light the risk genes of multiple sclerosis and the first new multiple sclerosis gene found in 30 years. A very important discovery if you ask me. 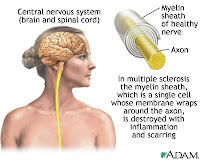 What is multiple sclerosis (MS)? It's a disease that affects your brain and spinal cord (together the central nervous system). Most neurons are not covered with myelin sheath, but those that are, they can achieve some mega speeds while transferring important information, such as any coordinated movement, or reading and writing.
Myelin sheath could be paralleled with an isolating material that helps the action potential to be transferred to or from the brain by 'jumping' and 'making stops' in between the Schwann cells (these are the cells that actually provide the myelin sheath, the gaps between Schwann cells are called nodes of Ranvier or nodus Ranvieri). In short, the myelin sheath provides protection from losing while transferring the signal.

Now, the symptoms of such a disease can be really hard on a person:
Why does it happen? It's believed to be an inherited disease, which the studies of Harvard and Duke universities have discovered and proved to be accurate. The other reason is that it could be an autoimmune disease, where cells from your own immune system attack your own cells. In fact, there could be a link between other autoimmune diseases and MS. So far, only genes within a region of chromosome 6 have to date been implicated in the disease, but quoting Simon Gregory, Ph.D.

We have identified a gene that increases an individual's risk of MS by 30 percent and that this variant has an effect on the function of the gene.

The new gene is found on chromosome 5. This particular gene is involved in providing guidance during the production interleukin-7 receptor alpha (IL-7R), an important receptor for the growth of crucial immune system cells. And there you have it, another theory almost proved to be accurate. The problem is how to cure it though, we're going to have to wait on that...