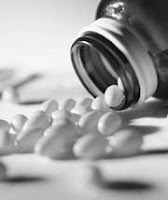 Antibiotics are still being used at a level that causes restistance on some bacteria. An antibiotic preserves its name only historically, thus it is not against all "bio" (forms of life), but only against several bacteria that are sensitive to some of them. Antibiotics DO NOT work against coughs and colds; common cold is a viral infection and should should not be treated with antibiotics. This occurance is a severe event and must be ceased immediately (bmj.com has published this article I'm blogging about today).
In short and quoting: 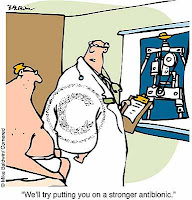 The bacteria (the ones that are able to at least, and there's a bunch of them!) can adapt to the "harsh" effects of an antibiotic, making themselves resistant, therefore surviving. This farmacological misuse should be stopped by educating the greater public that antibiotics aren't the solution to every disease. A continuous misuse of antibiotics should be handled with great care, since it can lead to killing the natural flora in several parts of our body, mainly the gut flora, such as Escherichia coli.

Email ThisBlogThis!Share to TwitterShare to FacebookShare to Pinterest
Posted in: bacteria, health, medicine