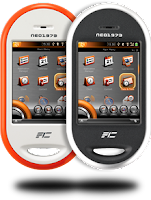 iPhones are so yesterday, OpenMoko's Neo Series the "in" for now - open source and as they say: "mobile FULLSTOP free FULLSTOP". The telegraphing typing manner is just an excuse for $300 of a wonderful piece of futuristic phone.

The colours are a reminder of Sony Ericsson Walkman series (which is a good thing). The thing is that this phone has much more capabilities than a Walkman, since you can hack it and make your own software, even edit the Operating System (OS).

The name of mobile, Neo 1973, somehow makes sense - for me at least: Neo as in "new" (greek) or Matrix futuristic gadget. Now about 1973... I'm really not sure, I believe it represents this event:

In the United Kingdom, due to coal shortages caused by industrial action, the electricity consumption reduction measure - the Three-Day Week comes into force.

You probably know that I'm just kidding. Anyway, if you're interested, get to the buying action. This phone is one of the few I've rated as probably good.

Email ThisBlogThis!Share to TwitterShare to FacebookShare to Pinterest
Posted in: phones, technology