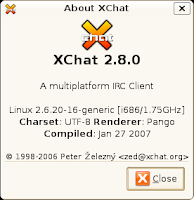 This isn't anything new. I've used Google to search to track down about how many servers are affected. The results are scary, dating back to 2003.
Big internet providers (here ISPs), such as TimeWarner AOL RoadRunner and Verizon (and probably Cox) have been redirecting and/or blocking entirely irc traffic to a dummy server, checking for irc bots. But the problem is that this method will not work unless they're scanning for spam bots (bots that throw URL links, using private query messages or channel messages). rBots and SpyBots that may reply to that sort of messages, but only in their control channel which is certainly not #badbotbad. Maybe this action is used in order to say that they're doing something as an excuse if a 'delink' occurs.

We can protect ourselves better than the ISPs can

So very true. At least IRC server personnel can ban or even clean an entire botnet in just minutes, not thanks to ISPs.

I leave you with some screenshots that the AbleNet administrator has acquired: Picture 1 Picture 2 Picture 3 Picture 4 Picture 5

Email ThisBlogThis!Share to TwitterShare to FacebookShare to Pinterest
Posted in: computers, IRC, security